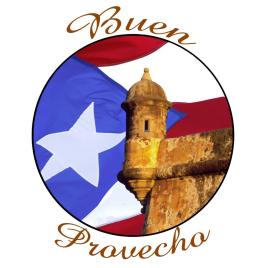 Sofrito is one of the many foods or food ingredients that identify us and set us apart as Puerto Ricans. But many of us don’t know that sofrito is used widely in the Caribbean and often goes by the same name. The term ‘sofrito’ was brought to the island by Spanish colonizers who prepare it in a tomato base with paprika. Sofrito is an Italian term and it means the same thing, except Italian sofrito has a few different ingredients than our own.

In the New World, traditional sofrito mutated under the influence of new ingredients. The biggest change was the color, from reddish to deep yellow, thanks to achiote seeds – which were commonly used by the native Taínos. Achiote, or annatto, gives margarine its distinctive golden hue and is a common commercial coloring.

Most homemade sofrito today is completed in a food processor or blender. In the old days our abuelas sofrito looked much like the picture above. It was chopped by hand and you could see, identify, and taste the ingredients. Of course it was a much better sofrito back then. But how easy it is to make it now – I won’t go back. I like to add olives and capers to the blender – just in case we find a finicky eater who refuses to eat them. I also add whole olives and capers after the blender just for show.

The aroma of fresh, homemade sofrito, is intoxicating.

Sometimes I like to use fresh sofrito ingredients in my dishes and mix it with readymade. I especially do this with bacalao guisao, which I like to serve with boiled yuca and white rice – Yum! Sometimes I take left over white rice and I add fresh diced sofrito – whatever I have on hand, stir fry it and then I plop a fried egg on top. It is what they call ‘comfort’ food – and it is great with tostones.

When making sofrito, make plenty, and freeze it in ice cube trays – once frozen dump into a large freezer bag and freeze (I like to double bag mine and squeeze out as much air as possible). That way you can have a stash in the freezer and only use what you need without any spoilage. Sofrito can be be refrigerated up to a week but then must be frozen. Even with store bought sofrito, if the entire jar won’t be used anytime soon – freeze it.

We find it hard in the states to find the right peppers – Italian cubanelle peppers, so we settle for a bit extra bell pepper. I also like to sprinkle cheyenne pepper – just a bit, for that ‘kick’. It is also hard to find recao – use cilantro instead.

Cook a roast in the crock-pot with sofrito, olives, EVOO (extra virgin olive oil) and tomato sauce. This gives you a fantastic criollo aroma and flavor. Serve with rice.

Sofrito is the ‘base’ for Puerto Rican cuisine. Traditionally, sofrito is made by sauteing achiote seeds in rendered pork fat. For special occasions I cook bacon pieces and use the fat and the bacon too – this of course, gives the meal a much better flavor. But today we try to stay away from pork fat so start with ½ cup vegetable oil, add approximately 1 tbsp. annatto seeds and cook over medium heat for a few minutes until the oil turns red. At this point you need to remove the achiote seeds, if the seeds are cooked too high they will turn the oil bitter and you will have to toss both seeds and oil and start again. Once the seeds are removed add the sofrito (defrosted) and bring to a medium-low simmer. The pan will begin to sizzle – cover it. Cook this over low heat for about 10 minutes until mixture begins to thicken. Now add the rest of the ingredients per your recipe. This is how you start any yellow rice, beans, soups, and meats for stuffing pasteles, alcapurrias, etc.